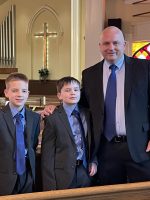 People say that Tim’s messages are funny, energetic, thought-provoking, and emotional, but Tim just says that he’s a “good storyteller.” Tim loves to use props, humor, congregational interaction, videos, and anything else that he can find to bring the Word of God to life.

Tim has an unusual story for a pastor. He grew up in the church, but never stepped foot in a church from the time that he was in middle school, until about 10 years ago. To make a long story short, he made tons of mistakes, and lived for himself, but God never gave up on him. God continued to call him, and once Tim finally said yes, he has never been the same!

After coming back to Christ, Tim received a master’s degree from Asbury Theological Seminary. Then, he was the lead pastor in the dramatic turnarounds of churches in both Tennessee and Oklahoma. However, Tim feels like his future is in the north. He feels called to turn Christ Community Church into one of the premier churches in Michigan.

Because of his past, Tim relates well with broken people. And by the way, when Tim refers to broken people. . .he’s referring to everyone! Because we’re all broken people in need of the grace of Jesus! Tim is not a “holier than thou” type of pastor. He is a flawed individual who is simply allowing God to use him to make a difference in the world.

Like many others, Tim has been harmed by churches in the past. He knows what that feels like. Because of that, he loves meeting others who have had bad church experiences to show them that there’s a better way. So, if you’ve ever been harmed by a church, felt unworthy to go to church, or felt like church is only a place where hypocrites gather, then Tim might be the perfect pastor for you!

Shoot Tim an email at Tim@ChristCommunityLansing.org.  He would love to hear from you.